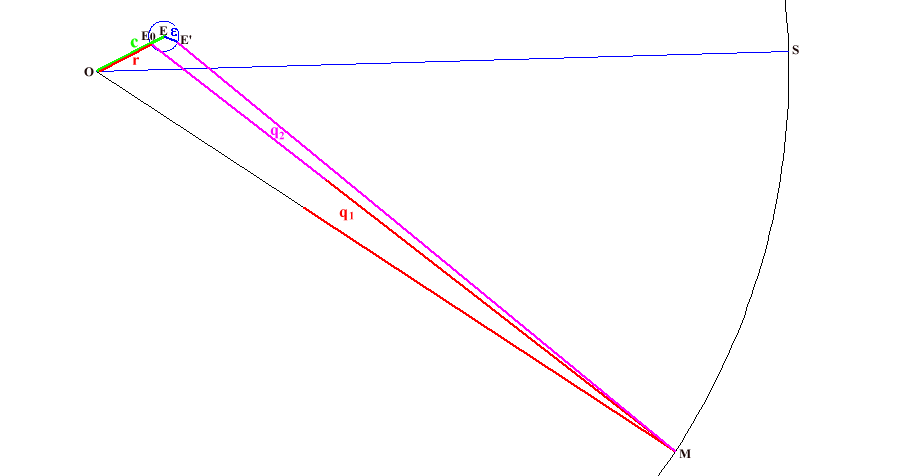 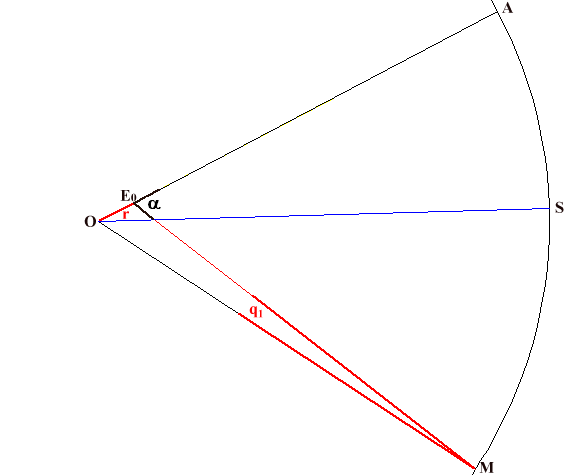 From « The Equant in India: The Mathematical Basis of Ancient Indian Planetary Models”

With D = distance from

With R = radius of deferent 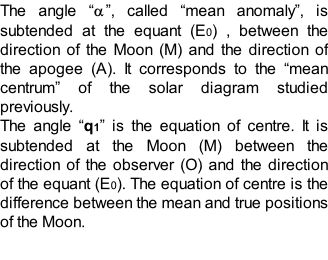 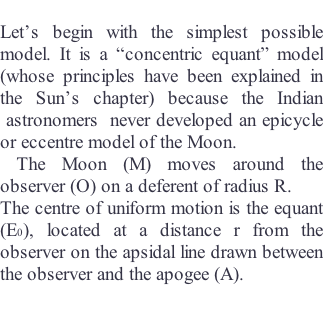 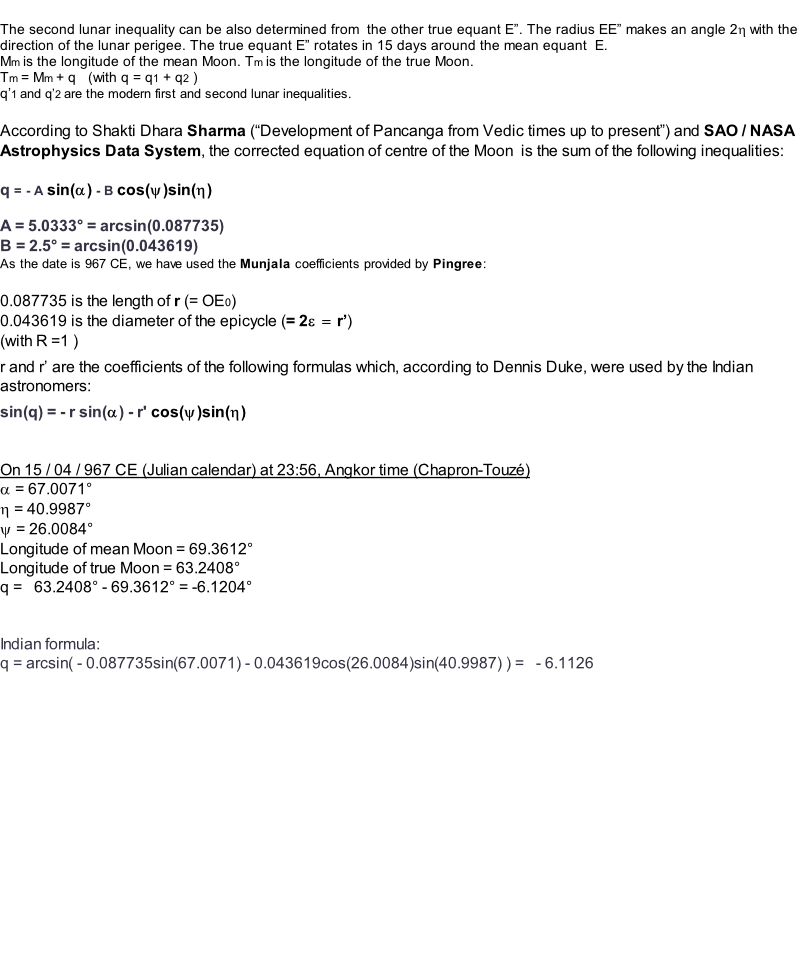 We describe here the model Munjala developed around 930 CE

Our sources are the web page of Dennis Duke

the web page of Michael  Nauenberg

and the relevant article of Pingree.

The diagrams were established from the geocentric longitude of the Moon on 15 / 04 / 967 at 23:56 Angkor time (the choice of this date is explained in the chapter “Later diagrams”)

We have developed a theory about the relationship between the locations of the principal Khmer monuments (and in many instances their orientation and internal measurements) and components of enormous Indian planetary diagrams “drawn virtually” on the Angkorian ground using the parameters of the “Midnight System”.

The latter is one of the two geocentric planetary models which appeared in the texts of the  Indian astronomer Aryabhata at the beginning of sixth century.

In the case of an outer planet (Saturn on the diagram),  a circle called " deferent " is drawn from an " observer " which is supposed to stand  on the Earth. The centre of another circle called the " Manda epicycle " rotates around the observer, travelling around the deferent.

The peripheral end of one radius (parallel to the apsides line) of this Manda epicycle  determines the centre of another epicycle called the " Sighra epicycle ".

The location of the Sighra epicycle’s centre is more clearly indicated on this magnified section of the Mercury diagram.

The equant of the inner planet is determined in the same way as that of an outer planet.

The “concentric equant” model of Aryabhata

At the beginning of the sixth century, Aryabhata developed the “concentric equant” model : the Sun moves on a circle of radius R called a “deferent” whose centre is the earth (observer). That means the distance between the earth and the Sun is constant. The motion of the Sun is uniform as seen from a point called “equant” which is located at a distance R x e from the earth (observer) in the direction of the apogee (e = eccentricity). That means the motion of the Sun is not uniform as seen from the earth.

Details are provided by the following web page of Dennis Duke: http://www.dioi.org/equant.pdf

The oscillating epicycle model of Bhaskara

The Aryabhata model is mostly an algorithm which is not suitable in the context of sacred geography and we have discovered the Khmers drew the solar diagrams by using the epicycle equivalent of the Aryabhata model developed by Bhaskara during the seventh century. It is an epicycle model whose eccentricity is variable. A relevant animation of Dennis Duke can be seen on :

The solar diagrams we have discovered obey the rules of the Bhaskara model ie:

For an astronomer, “m” indicates the mean position (ecliptic longitude) of the Sun determined from the apsides line. It is the position of the centre of the Bhaskara epicycle.

The apsides line is the line from perigee to apogee. The ecliptic longitude of the latter is indicated in the table of the “Midnight” parameters.

It is the eccentricity of the solar diagrams “drawn” on the Angkorian ground.

Another notion, the equation of centre, plays a role in the solar diagrams we have discovered :

With q = equation of centre

In astronomy, the “equation” is an angle that is the difference between the true position and the mean position of a body. Thus:

For an astronomer, “t” indicates the true position (ecliptic longitude) of the Sun determined from the apsides line. 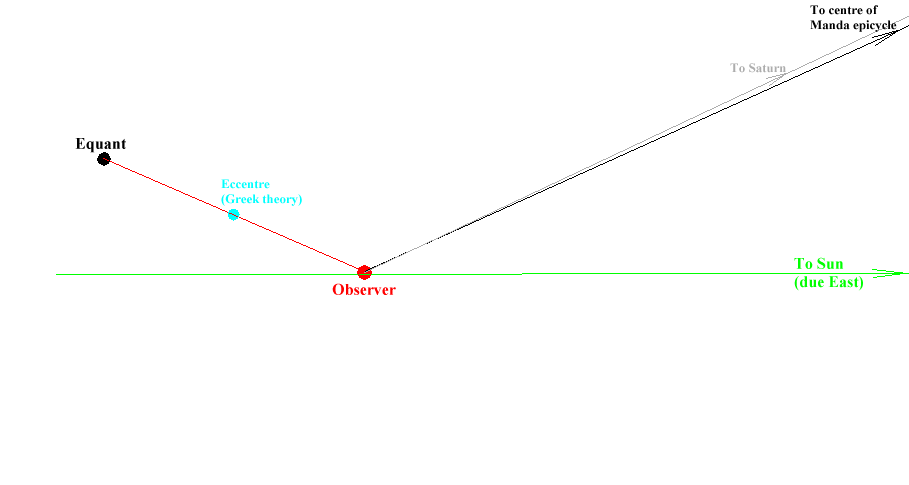 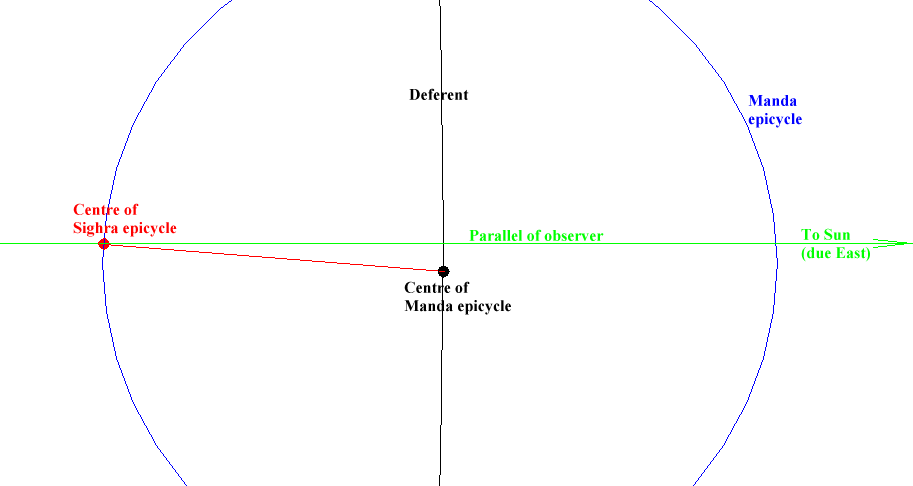 In the case of an inner planet (Mercury on the diagram), the centre of the Sighra epicycle is located on the straight line running through the observer and the Sun ie, in this case, on the geographical parallel of the observer.

The following diagrams show how the Indian and Khmer astronomers could determine the position of Saturn, Mercury and the Sun on 22 / 04 / CE 967  (Julian calendar) at midnight between 22nd and 23rd.

The " parallel of observer " is not a component of the " Midnight " system. It is a component of the diagrams  drawn virtually on the ground. In Khmer sacred geography, indeed, the Sun is always supposed  to lie due East of the observer (religious traditions).